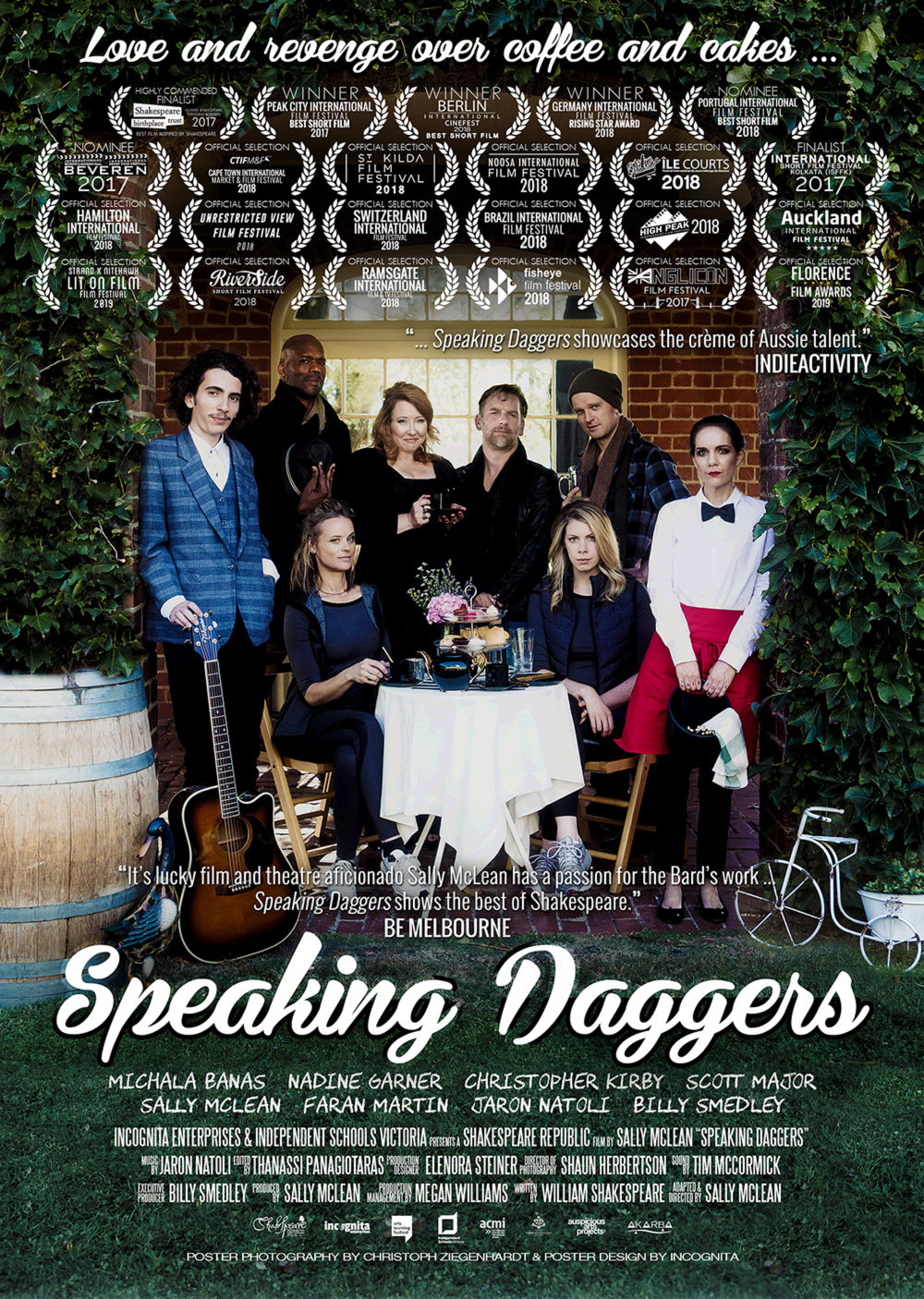 Love and revenge over coffee and cakes.

Eight people enjoy a fine Spring day at an outdoor café. At first glance, it could be a scene from anywhere in the modern world until they begin to speak. Eight characters from five different Shakespeare plays discuss love, revenge, deceit and power in overheard conversations, set against the backdrop of coffee, cakes and waitresses in crisp white shirts.

Over there is BENEDICK. One of the boys who likes the ladies, a good wine, a jaunty song and not taking life (or love) too seriously. He prefers the uncomplicated existence of no attachment and fosters proudly his independence and strong wit. Until he meets Beatrice, that is. A woman who makes him uncomfortable for all the right reasons and sees right through his facade. Has he met his match? And can two people who have tried romance once already and failed, truly make a go of it the second time around? As with all Shakespeare tales, the course of true love never runs smooth – as Benedick is about to find out.

And there is BEATRICE. Feisty, independent and loyal with a strong sense of justice, she has been engaged in a “merry war” with Benedick for many years. But as with all conflicts, the story behind this battle is not what it seems and built in heartache. Now with her cousin Hero publicly and unjustly shamed by Claudio, Beatrice needs someone true, loyal and brave who is prepared to stand up for what is right. But is Benedick truly a changed man and therefore that person? And can Beatrice show the same honesty with herself she shows with everyone else and admit that she feels more for him than just friendship, despite their rocky past? Despite her misgivings, Beatrice is about to learn that embracing her vulnerability could turn out to be her greatest strength.

Then there’s PRINCE HAL. He likes hanging out with his mates, carousing, playing up and generally avoiding all the responsibilities of his position. He doesn’t like following the rules, wearing fancy clothes or his Dad. His closest friend is Falstaff, who routinely leads him into trouble. While all this seems like fun, we can tell you this isn’t going to end well for some of Hal’s mates, or for him for that matter … it is Shakespeare, after all.

And where Hal goes, there’s always FALSTAFF. Rebel without a cause, roustabout, bane of the authorities and general n’er-do-well, he is Prince Hal’s best mate and a very bad influence. But who can’t help but admire his zest for life and general joie de vivre? Infectiously flippant, a perennial liar and yet, such good company … he is forgiven for just about everything he does. But will his luck eventually run out? Sadly, the cracks in his friendship with the royal heir are beginning to show. Is he living on borrowed goodwill and time? If he is, we know he’ll be aiming to go out with a drink in hand and a juicy Shakespearean insult on his lips – like any good larrikin would.

Through all this, the TROUBADOUR simply plays. As with all artists, he is an observer; a recorder and teller of tales. With roots leading back to the bards of old, the keepers of lore, he is a storyteller who works with music and song to comment on life, love and the human condition in all its varied experience. Unacknowledged by all, yet tangibly, subtlety affecting everyone who hears his song, he tells their stories with heart and soul from his place within and yet without their circle.

DESDEMONA is a gal who knows what she wants and goes after it, is headstrong, loyal, honest and true. Her one true love is Othello, and her closest confidant is Emilia … both bonds formed in haste and not wisely, as things turn out. Desdemona takes the idea of living in the moment to its extremes. Some would go as far to say she has poor impulse control and never looks before she leaps. We think she just hasn’t yet had reason to not trust her judgement and perhaps trusts too much that everyone sees and approaches the world as she does. Sadly, she is now discovering this is far from the case.

And then there’s EMILIA. Married to Iago, Emila is a complicated woman. Worldly, clever and some might say immoral in some of her choices, she believes she is doing the right thing to win her husband’s love and respect (of which he shows her neither). But unlike her husband, she has a conscience and limits to what she will do, to get what she wants. A survivor with a good heart, she instinctively wants to help Desdemona understand the world she is now a part of, as she can see how innocent Desdemona is, and therefore how at risk she will be. Not least because she suspects Iago is using Desdemona for one of his nefarious schemes. But unfortunately, it may be too little, too late … for both of them.

And finally, ISABELLA. Feisty, clear-eyed, with a strong sense of justice, she isn’t one to be manipulated easily. Living slightly apart from the rest of the world, she is another observer who prefers standing on the outside looking in to being the centre of attention. Despite this, she can’t completely step away from society and all its trappings and traps. A keen observer of human nature, she isn’t easily fooled. And despite her apparent toughness, underneath she is a gentle soul who feels too keenly to be completely immune to others’ energy and intentions. That said, she is far from a wilting flower and not one to be trifled with – for there will be consequences, and not just for her.

This short film is an extension of the web series, Shakespeare Republic, set in the same world as Season Two, but created as a new stand-alone piece.

“… polished, beautifully made series from director/producer Sally McLean … a fine use of the platform and, more importantly, a very fine adaptation of the Bard … Shakespeare Republic is put together with grace and wit. An assortment of actors do terrific work making the (non-dumbed down) dialogue accessible, prying it open with great care and skill.”

Created by Australian actor, Sally McLean in 2015, Shakespeare Republic is an internationally award-winning, female-led and culturally diverse digital anthology series produced by Incognita Enterprises that celebrates not just the world’s greatest playwright, but also his insightful understanding of the big issues of his time. Insights that still hold relevance today and form the basis for a truly diverse, inventive and epic journey into the nature of being human. Shakespeare Republic, now entering it’s third season,is a journey through the works of William Shakespeare and his fellow Elizabethan and Jacobean playwrights, with the aim of rediscovering, reinvigorating and occasionally re-interpreting these universal observations in a modern setting, through the lens of current events and social issues of our time.

“… taking the world by storm, done in an inventive, captivating way
… the entire series is astonishingly smart.”

WHY DO WE EXIST?

Our manifesto is simple –

TO ENGAGE NEW AUDIENCES with Shakespeare’s works through the use of “bite-sized” pieces of text, that reduce the anxiety many feel around attending a full Shakespeare play, thereby introducing new audiences to the work who might not otherwise engage;

TO EDUCATE AND ENTERTAIN MODERN AUDIENCES ABOUT THEIR WORLD using Elizabethan and Jacobean Theatre text; and

CHALLENGE THE CONCEPT OF “TRADITIONAL” SHAKESPEARE, while still remaining true to his original text.

“… a sophisticated twenty-first century series with its own particularly Australian flavour.”

To find out more about the series, check out the official site here: www.shakespearerepublic.com